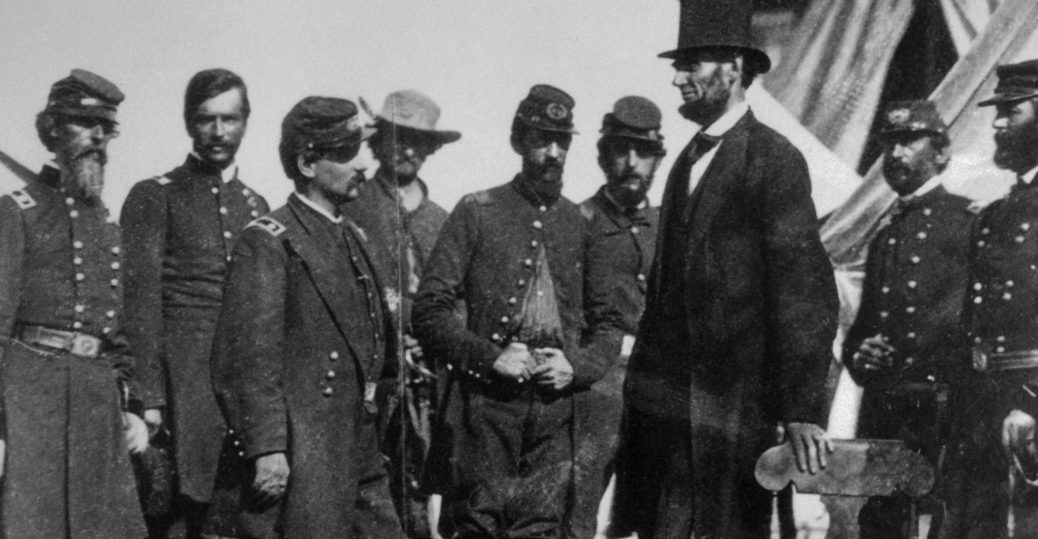 In the fourth installment of this multi-part post, contributing editor Joshua Ward Jeffery continues an examination and discussion of the historiography of morality and ethics in the American Civil War. You can find Part I here, Part II here, and Part III here.

McPherson judged Lincoln’s morality quite differently. In The Battle Cry of Freedom, McPherson viewed Lincoln’s issuance of the Emancipation Proclamation as much more than a simple measure to escalate the conflict to total war.  To be sure, McPherson did see the proclamation as a war measure, but more importantly, he saw it as one of several tools that Lincoln applied at the same time in order to do what was right.[50] As McPherson interpreted it, Lincoln employed a multi-pronged strategy to eliminate slavery: by pushing for gradual, compensated emancipation in border states, by advocating the colonization of freed African-Americans, by issuing the proclamation in order to free slaves in Confederate States as Union armies took additional territory, and through other legal and Constitutional means.[51] McPherson also saw Lincoln’s movement towards the proclamation as one of “intentional ambiguity,” where he intentionally kept parties from all sides off balance and unsure of his true intentions until the moment that he was ready to reveal his hand.[52]  To McPherson, such deception was not only a strong political move, but also a very moral one, as to him, the true evil was not an escalation to total war or the means of that total war once it came about, but slavery.

Like McPherson, Burris Carnahan had no qualms with Lincoln’s pursuit of total war. Carnahan, Professorial Lecturer in Law at the George Washington University School of Law, argued in two succinct volumes a thesis the opposite of Stout: Lincoln’s prosecution of the war was indeed moral because it accorded with the Law of Nations, and therefore, according to the Just War Tradition, was engaged in justly. Burris’ first book on the subject, Act of Justice, explored Lincoln’s issuance and enforcement of the Emancipation Proclamation as an act of war.  Carnahan set out to fill what he saw as a gap in the historiography, stating that “Although there have been many thoughtful efforts to explore the constitutional context of the Emancipation Proclamation, the rest of the proclamation’s legal context remains largely uncharted territory.”[53]  Carnahan proceeded to explore that context, relating the Emancipation Proclamation not so much as a legal measure under the U.S. Constitution, but as a war measure permitted by international law.  Carnahan showed that most American legal scholars believed that during the normal course of events, the federal government had no jurisdiction over slavery.[54] However, Carnahan discovered that Charles Sumner, the ardent abolitionist, pleaded with Lincoln to seize slaves as a war measure at the very beginning of the war, appealing to John Quincy Adam’s work before a joint tribunal for war claims between Great Britain and the United States in the aftermath of the War of 1812. Adam’s work and his later speeches demonstrated that the seizure and freeing of slaves as a military measure was allowed under the Law of Nations, and that the British not only freed American slaves during the war, but that the federal government had previously freed Southern slaves as a war measure during conflicts with Native American tribes.[55]  Carnahan then traced the use of emancipation of slaves as a war measure in Venezuela and Columbia in 1814, as well as emancipation of British slaves who reached Spanish Florida in the 1680s.[56] This history Lincoln knew well, as it was described to him by men such as Senator Sumner, Secretary of War Stanton, and Lincoln friend Orville Hickman Browning.[57]

After Carnahan established that the Law of Nations allowed emancipation as a war measure, he moved on to prove that as a domestic measure, the Emancipation Proclamation might not have survived legal challenges after the end of the war.  Appealing to case law from the War of 1812 and the Mexican War, Carnahan demonstrated that the U.S. Supreme Court under Chief Justice Taney (the same justice who authored the Dred Scott decision) rejected federal arguments for unlimited power in seizing private property during times of war, and in fact made federal officers personally liable for property they seized under the doctrine of military necessity.[58]

After demonstrating issues in domestic law with federal emancipation, Carnahan explored the development of Lincoln’s thought and treatment of the Confederacy from a band of conspiring insurrectionist rebels to a fully armed and recognized belligerent force under the Laws of War.[59]  As is well known, Lincoln, by his lack of understanding of International Law at the beginning of his Presidency, declared a blockade against the South, which amounted to an acknowledgement of their belligerent status under the Laws of War.[60] However, Carnahan took analysis of the inadvertent application of the Law of Nations to the Confederacy to a new level by exploring how Union commanders, through their taking of Prisoners of War, use of the Flag of Truce, and other usages of war, also accidentally recognized the Confederacy as a legitimate belligerent.[61]

Starting in 1863, the federal government began to officially recognize the Confederacy as a legal belligerent to which the Laws of War applied.[62] Once this was done, it was an easy step from recognition to the application of principles such as military necessity to the fight against the Confederacy. In this vein, Lincoln authorized the adoption of the Lieber Code, a distillation and “codification of the law of war” for U.S. Forces that remains in force to this day.[63]  The adoption of the Lieber Code was, in effect, a enshrining of total war in U.S. military policy.  Similarly, Lincoln would then employ the Emancipation Proclamation as a tool of military necessity consistent with the Lieber Code and International Law.  The proclamation became a “weapon of war,” that had both immediate and future consequences. According to Carnahan, “after General Order 100 (the Lieber Code), whenever the U.S. Army marched into enemy territory in a future war any persons there held as slaves would be free. Now freedom would follow the flag.”[64]

Taken altogether, Carnahan’s history of the development of the proclamation shows Lincoln the lawyer as developing his understandings of International Law and Military Necessity in order to overcome Constitutional problems with emancipation.[65]  Such a development made Lincoln out to be not only a skilled attorney and politician, but a man of strong moral character who sought to overturn slavery legally and finally at the beginning of the war.  I found Carnahan’s analysis of Lincoln, his development of the proclamation as a weapon of war, and the constitutional and international legal intricacies of freeing Southern black slaves to be quite convincing.  While most reviewers praised Carnahan’s book, not all scholars were pleased. In a review appearing in The Review of Politics, Herman Belz wrote:

Although provocative and illuminating Act of Justice under theorized as a consideration of the relationship between the U.S. Constitution and the law of war. A premise of the study is a distinction between constitutional context and legal context Carnahan makes no effort however, to define the constitutional context or to explain how it has been adequately explored in relation to the Emancipation Proclamation.[66]

I found Belz’s critique puzzling, because while Carnahan does make the historiographical claim that the Constitutional context of the Emancipation Proclamation had been explored well, his reason for writing this monograph was not to explore that context further, but to explore the context of the proclamation under International Law.  While flushing out the historiography would be helpful in such a text, the lack of such work does not make the book “under theorized.” Belz closes his review with the statement that “Finally, it is a stretch to say that the Emancipation Proclamation presented itself as an ‘act of justice’ in virtue of the right of emancipation of an oppressed people under the law of war.”[67]  Belz cites formulations of international law under Vattel regarding the liberation of citizens in a portion of the conquered Swiss Confederacy and fails to see the relationship between the Swiss case and Southern slaves. Such a statement is bizarre because Carnahan did not cite Vattel in this case, and ignored the fact that Carnahan’s main argument is that the slaves were freed under the concept of military necessity as allowed under the Laws of War.

Carnahan’s second volume examined the Laws of War as it applied to the rest of the conflict. Significantly, one of Carnahan’s major arguments in his second volume was that the even though the war was in fact a Civil War and not an international conflict, the Constitution, as interpreted by the Supreme Court, invested Lincoln as Commander in Chief with the same authority to act in an insurrection as he had in a full-on war with another nation-state.[68] Therefore, while Lincoln was acting in accordance with the Laws of War, his legal authority to apply those laws to the conflict, according to the Court, was none other than the U.S. Constitution.[69]  Carnahan, in his own way then, answered the critiques of Belz regarding Carnahan’s book on the Emancipation Proclamation and the Laws of War. I found Carnahan’s discussion of the relationship between the Constitution and the Law of Nations, or the “usages of war,”[70] to quote the court, to be quite satisfying and an important addition to the scholarship on the subject.

But while Carnahan’s discussion on the relationship between the Constitution and the Laws of War were satisfying, much of Carnahan’s later analysis of the conflict, viewed through the lens of the Lieber Code, was much less so.  Carnahan argued that the Lieber Code “remains the best summary of the laws and customs of war as they existed in the middle of the nineteenth century.”[71]  Such a statement is problematic from a number of points. First, it can be argued that the customs and laws of war are separate, and that in some instances, diverge.  In other words, what was legal in the nineteenth century may not fully comport with what was considered to be just under the customs of war as enumerated by Just War Theory.  Furthermore, because as mentioned above, Lincoln’s legal authority for putting down the Confederate insurrection was first and foremost granted by the Constitution, which enshrined federal law as the law of the land, the adoption of the Lieber Code as a piece of federal military law necessitates that the Code was in fact “the law of war” for the United States. In other words, Carnahan’s logic, for an attorney, is quite circular.

[51] Ibid, 562-3; For Lincoln’s use of colonization as one of several pieces meant to either ensure the end of slavery or to prepare the way for abolition, see Ibid, 509-510.

This essay will be continued in a future post.