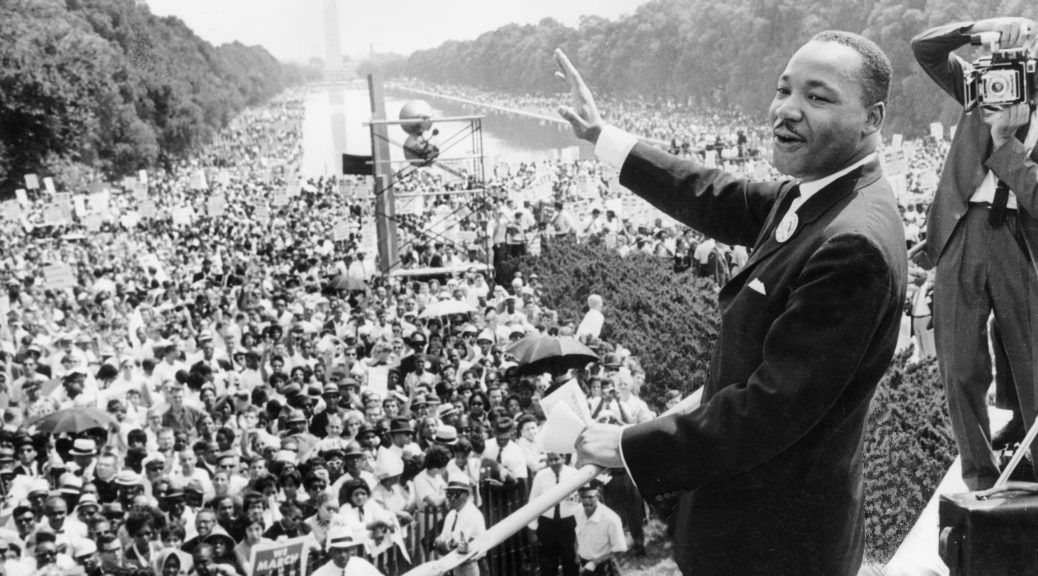 To the extent that most Americans think about civil rights, Martin Luther King Jr. no doubt remains stationed at the Lincoln Memorial. The figure of Lincoln towering behind him, King, whose memory scores of Americans celebrated only a few days ago, declared his vision for a color-blind America. Droves of history textbooks reinforce this narrative and, without explicitly noting it, highlight a “short” civil rights movement. Until the 1990s, scholars interested in the civil rights era focused on landmark political victories, including the 1954 Brown v. Board of Education decision and the Voting Rights Act of 1965.

Historians in recent years, however, have complicated this image. In a 2005 essay, Jacquelyn Hall rightly critiqued the “short” civil rights narrative. Emphasizing “a more robust, more progressive and true story,” Hall calls for historians to embrace a “long civil rights movement” with roots deeper than Brown v. Board of Education and one that lasted beyond the political victories of the mid-1960s (Hall, The Long Civil Rights Movement, 1234). In other words, legislation such as the Voting Rights Act of 1965 did not happen in a historical vacuum. National leaders such as King did not spring up in historical isolation. Rather, the civil rights movement featured scores of virtually unknown black and white Americans, and various forms of resistance began before the 1950s. Further, suffering among black communities, perpetuated in the name of white supremacy, certainly did not vanish with the passage of various civil rights legislation in the 1960s. Scholarship in recent years has effectively pushed the geographic boundaries of the civil rights movement, making plain that the fight for racial equality is not simply a story about the southern US. Just as important, historians writing over the last quarter century place tremendous emphasis on the critical role that war—especially World War II—played in driving civil rights in the US.

Two important works published in the 1990s, John Dittmer’s Local People and Charles Payne’s I’ve Got the Light of Freedom, helped move the emphasis of civil rights history away from a national lens toward the local, as Dittmer’s title notes. Focusing on the story of Mississippi’s civil rights movement, Dittmer’s work details the ways in which throngs of white Mississippians fought bitterly to maintain white supremacy, and the black men and women who battled, sometimes to the death, to establish basic human rights for African Americans.

More than a dozen years before the national political battles of the 1960s, black World War II veterans sought to register to vote in 1946, two years after Smith v. Allwright, a Supreme Court decision that supposedly outlawed all-white primaries. Home from fighting in WWII, 21-year-old Medgar Wylie Evers led a group of fellow black veterans to vote in Decatur only to be turned away by “some 15 or 20 armed white men” (Dittmer, Local People, 2). In the face of intimidation and beatings, hundreds of black Mississippians ultimately cast ballots in the 1946 Democratic primary. As civil rights activism mounted in the decade following WWII, Dittmer makes plain that such efforts did not simply spring onto the scene in historical seclusion; instead, activists leaped from the shoulders of black resistance that started immediately after WWII. In some instances, the same activists who faced physical threats at courthouses in 1946 became leading figures in Mississippi by the 1950s. Indeed, it was Evers who became a state field secretary for the Mississippi NAACP.

Arguably more than Dittmer, Payne makes clear that activists in the 1960s working in Mississippi relied heavily on networks of connections carved out by black activities stretching back to the 1940s. Payne also adds two other important insights: the ways in which many activists organized—adopting a bottom-up approach as opposed to top down—and the ways in which, as the title of Dittmer’s book conveys, “local people” played crucial roles in the movement. Consider the teachings and example set by Ella Baker, something of a behind-the-scenes organizer who criticized more charismatic leaders. Mary King, a white graduate of Ohio Wesleyan University who joined the civil rights struggle through the Young Women’s Christian Association, said this of Baker’s influence: “She taught me one of the most important lessons … There are many legitimate and effective avenues for social change and there is no single right way” (Payne, I’ve Got the Light of Freedom, 3).

Historians active since the turn of the twenty-first century have continued to offer important correctives. Three lessons are especially evident. First, there were other important activists besides King working during the twentieth-century to advance racial equality. Second, the struggle for equality in the “second half” of US history is not just a southern story—it encompasses northern swaths of the US, as well as the world itself. Third, the hard-fought political victories of the early-to-mid 1960s did not trigger immediate positive changes in the lives of African Americans. As detailed in Timothy Tyson’s Radio Free Dixie, the North Carolina-born Robert F. Williams, a WWII veteran who in his youth observed unspeakable acts of physical and sexual violence performed by whites on black workers, Williams articulated a simple vision for African Americans: physically fight back. Suspended by the NAACP in the late 1950s for his proposed militancy, Williams went to Cuba where he broadcast his views in English on the program Radio Free Dixie.

Tyson also situates Williams in the global context of the Cold War, a conflict that both hindered and helped civil rights activists in the US. As members of the Communist press in the Soviet Union wrote openly about US hypocrisy on race issues, Williams understood how politically powerful it could be to expose to the world the baffling ironies of the US, a country committed through many of its written documents to freedom and equality. “Because of the international situation,” Williams declared, “the Federal Government does not want racial incidents to draw the attention of the world to the situation of the South” (Tyson, Radio Free Dixie, 104). In 2000, Mary L. Dudziak put America’s race problems in a world context. Presenting American government in the 1950s and 1960s as obsessed with their foreign image during the Cold War, a range of US policymakers and diplomats worked to present the US as making steady progress on race relations. To communicate this belief to legislators in Washington, John F. Kennedy asked Secretary of State Dean Rusk to speak to Congress ahead of a vote on civil rights legislation about the ways in which domestic race relations affected America’s global image.

Placing the story of civil rights back within a national lens, Thomas J. Sugrue’s Sweet Land of Liberty stands as a powerful rebuke to those historians who claim that civil rights-related struggles happened only in the South. Consider that in 1958, parents in Harlem, New York, kept their kids home to protest segregated schools; in the same year, black parents and students boycotted schools in Long Branch, New Jersey and staged walkouts in Hempstead, New York (Sugrue, Sweet Land of Liberty, 167-169). Sugrue’s work is more than a criticism of racist northern whites and the historians who have ignored them; his scholarship likewise condemns local and state governments in northern states who pushed and enforced deeply racial laws.

Recent works has made plain that even after important political triumph in the 1960s, rural black southerners lacked virtually any personal economic security. As the activist Ezra Cunningham put it, “you can’t eat freedom” (de Jong, You Can’t Eat Freedom, 52). According to Greta de Jong, the battle for first-class citizenship, deeply wed to agricultural mechanization, raged on after the passage of 1960s civil rights legislation. In other words, the rural black antipoverty struggles that happened from the 1960s through the 1980s were intimately connected to earlier civil rights struggles—though hardly part of a single, unified movement. As de Jong makes plain, droves of African Americans from the 1960s forward determined to remain in the only geographic region they had ever lived—despite white conservative desires to see these workers leave the South after mechanization shriveled job opportunities in the former Confederacy. As such, these black residents kickstarted multiple initiatives. Consider that in 1966—two years after Freedom Summer and the passage of the Civil Rights Act—evicted sharecroppers took over an abandoned Air Force base in Mississippi. The sit-in drew national attention and sparked further interest in the condition of rural poor blacks in the South. After touring some of the nation’s most depressed rural areas in 1967, US Secretary of Agriculture Orville Freeman noted to President Lyndon B. Johnson that scores of black families in the South and North lived “in shocking poverty … it matches in some instances the worst I have seen in less developed countries around the world” (de Jong, You Can’t Eat Freedom, 52).

Scholarship published over the last quarter century has made plain that there were many other important protagonists besides King, critical as he was, in the “long” civil rights movement. Indeed, WWII veterans such as Evers and the grassroots-organizer Baker are among the many black activists who played important, if likely underappreciated by most Americans, roles in the civil rights struggle. Further, resistance to white supremacy and a push to usher in first-class citizenship started before Brown v. Board. The efforts of black WWII veterans to vote in the Deep South is but one example. Finally, there is without question no clear end point in the civil rights movement. As de Jong makes plain, efforts for economic sustainability in places such as Mississippi raged on after the mid-1960s.